If you want a taste of the excitement that’s in store for you in Pokkén Tournament DX on Nintendo Switch, be sure to check out the demo version that’s available on Nintendo eShop.

You can control over 20 different Pokémon in Pokkén Tournament DX, including such well-known favorites as Pikachu, Charizard, Mewtwo, Lucario, Darkrai, and Decidueye. Each of these Battle Pokémon has its own unique characteristic and combat style you’ll need to master to come out on top.

In addition to your Battle Pokémon, you also have a pair of Support Pokémon that you’ll bring into the brawl. These useful helpers, including Pokémon such as Eevee, Dragonite, Latios, Jirachi, and Litten, can be called onto the field when your Support Gauge is full. They provide various effects, such as dealing damage to your opponent’s Battle Pokémon, raising your Battle Pokémon’s stats, and more.

Gameplay in Pokkén Tournament DX will be very familiar to anyone who has played a fighting game but with some twists to give it its own flavor. Each Battle Pokémon has access to a wide range of powerful moves, including short- and long-range attacks, grab attacks, and counterattacks.

The action during battle switches between two different modes: Field Phase and Duel Phase. During the Field Phase, players can freely move around the arena as they attack their opponent. Certain attacks will trigger a Phase Shift, causing the fight to switch to the Duel Phase. Here, both players move on a two-dimensional plane and have access to a wider variety of attacks.

When you need a bit of a boost in the heat of battle, you can activate a Synergy Burst, which will temporarily raise your attack and defense while slightly regenerating your HP. You’ll even see some Pokémon Mega Evolve during their Synergy Burst! During a Synergy Burst, you can also perform a Burst Attack. This incredibly powerful attack not only looks impressive, but it deals a ton of damage to the opposing Pokémon, too.


Many Ways to Play

Pokkén Tournament DX features multiple game modes requiring different strategies that will challenge your fighting skills. In addition to traditional one-on-one battles, you can also participate in Team Battles. Here, you choose three Battle Pokémon to enter the fight. During each round, both players choose which Battle Pokémon they will control. At the end of each round, the HP and Synergy Gauge of the winning Pokémon carries over. The team that knocks out all three of their opponent’s Pokémon first will be victorious!

For something new every day, check out the Daily Challenge. Here, you will partake in either a Basic Battle or a Team Battle with specific clear conditions and predetermined Battle Pokémon. Complete the challenge, and you will earn Skill Points, which can be used to improve your Battle Pokémon’s stats. This is a great way to help your Battle Pokémon become even stronger.

Enter the Ferrum League, and you can partake in a quest to become the League Champion. Here, you’ll battle through four different leagues, facing more-challenging opponents as you work your way toward the top. There are also missions to complete that will earn you rewards as you play. Along the way, you’ll experience the story of a mysterious girl who has an unusual connection to Shadow Mewtwo.

Take on human opponents in multiplayer matches both in person and online. When playing a local game, you can share one of the Joy-Con controllers with a friend to have awesome head-to-head battles anytime.

If you’re competing online, you can enjoy two kinds of battles—Rank Matches and Friendly Matches. In Rank Matches, you compete for the best ranking with players from around the world. The ranking will depend on the rank points you receive from the outcomes of your battles and how many wins you have. It’s a good way to test your skill against players of similar ability.

Friendly Matches let you take on friends or random opponents in battles that do not affect your rank. You can also check out your match record to see where you sit among all players using Ranking, and Replay allows you to view your own and other players’ past matches.

Give Pokkén Tournament DX a personal touch with My Town. Here, you can adjust the appearance of your player character, known as a Battle Trainer. Choose your gender, skin color, face, accessories, and more. Plus, you can use in-game currency called Poké Gold to acquire new items to customize your Battle Trainer.

The DLC pack includes two new Battle Pokémon: Aegislash—which can switch between two forms, making it twice the threat in battle—and the mighty Blastoise. There are two new pairs of Support Pokémon: Mega Rayquaza and Mimikyu as well as Mew and Celebi. The Battle Pack DLC also includes new avatar items and more!

With its easy controls, simple game system, and exhilarating battles between dynamic, realistic Pokémon, Pokkén Tournament DX is an exciting take on the world of Pokémon. 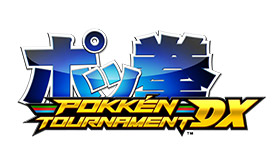 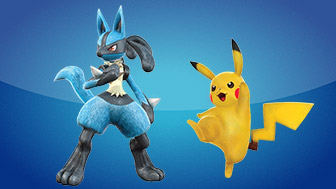