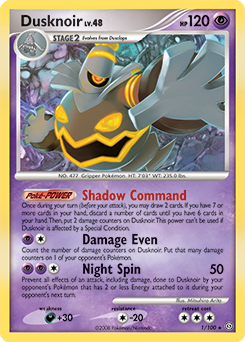 Once during your turn (before your attack), you may draw 2 cards. If you have 7 or more cards in your hand, discard a number of cards until you have 6 cards in your hand. Then, put 2 damage counters on Dusknoir. This power can’t be used if Dusknoir is affected by a Special Condition.