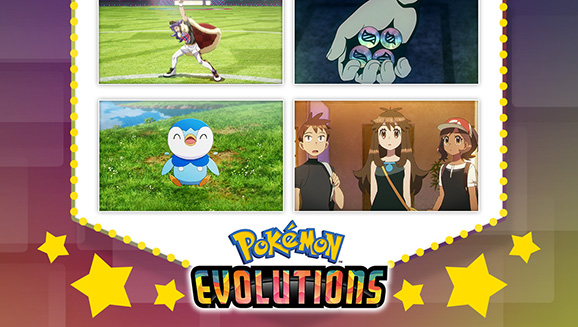 Take On the Pokémon Evolutions Quiz

Test your knowledge of all eight episodes of the animated limited series with questions about Pokémon, Trainers, and lore.

As millions of fans have discovered on YouTube and Pokémon TV, Pokémon Evolutions offers a compelling tour of the wonderful (and vast!) Pokémon world. And now that you've had the opportunity to watch all eight episodes, which are available on Pokémon TV and the official Pokémon YouTube channel, it's time to test your knowledge! How well do you know the Trainers, Pokémon, and events of Pokémon Evolutions? Take the quiz to find out.


1. Which stadium in Galar is the setting for the battle between Champion Leon and the Challenger?

2. In “Episode 1: The Champion” what does Leon call out in the Stadium before his battle with the Challenger?

3. Which Legendary Pokémon does Lusamine, the leader of Alola's Aether Foundation, say she will catch when she vows to open an Ultra Wormhole?

4. In “Episode 2: The Eclipse,” which two people fall out of the Ultra Wormhole after it unexpectedly appears above Lillie?

5. With which two Kalos residents does Lysandre share his vision for the world?

6. Which three Pokémon are playing in Professor Sycamore's study?

7. Which Legendary Pokémon does Unova's Team Plasma release from the Dark Stone?

9. Which Sinnoh region Pokémon emerges from the Poké Ball that Barry throws from Professor Rowan's briefcase?

11. In Zinnia's tale of Hoenn lore, which two Legendary Pokémon fight each other?

12. The Sky Tower in the Hoenn region was constructed by the Draconid people to protect what?

13. Which city in Sinnoh is the setting for the Kimono Girls' epic performance of Legendary Pokémon lore?

14. In “Episode 7: The Show” which two Pokémon created the effects of the lightning storm during the performance?

15. Which three Kanto Trainers are competing to catch Mewtwo in Cerulean Cave?

16. After Mewtwo has been captured in Cerulean Cave what does Green give Elaine?

So, how well do you know Pokémon Evolutions? Give yourself one point for each correct answer, and then check your score with the chart below:


0–5 points: You're a beginning Trainer! You've taken the most important step by starting your Pokémon Evolutions journey. Now hop over to YouTube or Pokémon TV to rewatch the series.

6–10 points: You're a collector! You're getting closer to evolving as a Pokémon Evolutions expert. Brush up by watching the episodes you're the least confident about.

15–16 points: You're a Pokémon Professor! Congratulations! You've evolved into a Pokémon Evolutions expert, demonstrating impressive knowledge of the Pokémon world.


Feel like rewatching Pokémon Evolutions? You can find all eight episodes on Pokémon TV and the official Pokémon YouTube channel.

Back to News
Back to Top