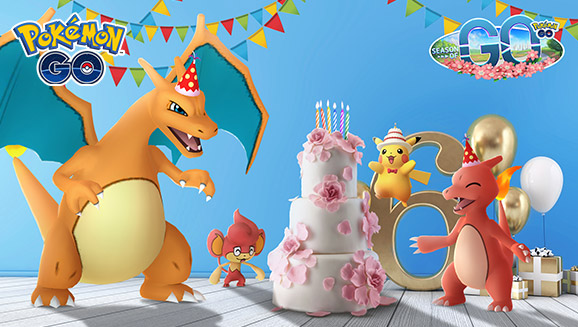 Party with Pansear during the Pokémon GO Anniversary Event!

In lieu of birthday cake and balloons, celebrate with a Battle Weekend, Shadow Latios, Shiny Unown E, and so much more.

Pokémon GO's another year older, and it's time to celebrate with the Ultra Unlock: Anniversary Event running through July 12, 2022, at 8:00 p.m. local time. Charmeleon wearing a party hat, Charizard wearing a party hat, and Pikachu wearing a cake hat will all make their Pokémon GO debuts! Pansear is also getting into the party spirit—while it's usually only available in certain regions, it will appear globally in the wild and in raids throughout the event.

Partner up for this epic party with your favorite first partner Pokémon from Kanto, Johto, Hoenn, Sinnoh, and Unova. If you evolve these Pokémon during the event, they'll be able to learn featured attacks from past events. Evolve Bulbasaur, Chikorita, Treecko, Turtwig, or Snivy and they'll learn the Charged Attack Frenzy Plant. Evolve Charmander, Cyndaquil, Torchic, Chimchar, or Tepig and they'll turn up the heat with the Charged Attack Blast Burn. Evolve Squirtle, Totodile, Mudkip, Piplup, or Oshawott and they'll make a splash with the Charged Attack Hydro Cannon. Plus, Charmander and Charizard can learn the Fast Attack Dragon Breath. Many of these first partner Pokémon will come in handy during the GO Battle League Element Cup running from August 3, 2022, to August 10, 2022, as Trainers can only compete with Fire-, Water-, and Grass-type Pokémon with a CP of 500 or lower.

The following Pokémon will appear in raids throughout the event.

*If you're lucky, you may encounter a Shiny one!

Roll up your sleeves and get ready to take on Team GO Rocket—including their dastardly leader, Giovanni. From July 9, 2022, at 12:00 a.m. to July 10, 2022, at 11:59 p.m. local time, you can begin a new Special Research story, enjoy event bonuses, encounter new Shadow Pokémon, and save Shadow Latios from Giovanni. Trainers will have until September 21, 2022, at 10:00 a.m. local time to claim the Special Research.

During Ultra Unlock: Battle Weekend, Team GO Rocket Grunts will bring Shadow Geodude, Shadow Shinx, Shadow Patrat, and Shadow Purrloin into battle. Save these Shadow Pokémon and then teach them a new Charged Attack with a Charged TM during this special weekend. Opportunities to unlearn the Charged Attack Frustration don't happen often, so make the most of this brief window.

The following bonuses will also make this weekend an ideal time to participate in raids and battle other Trainers.